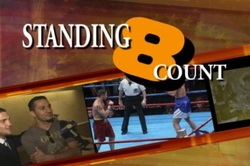 Standing 8 Count, the brainchild of television sportscaster AJ Vittone, is a 30 minute weekly television news/talk program devoted entirely to the sport of boxing. The program, which is intended for a national television audience, recaps the week that was in the world of boxing and at the same time, previews the upcoming week, with a plethora of stories, feature segments, highlights, fighter profiles, interviews and analysis.

The mission of Standing 8 Count (originally written in the spring of 2003) is to develop a 'cult-like' following immediately and as a result, help to place the sport of boxing 'back on the map' in this country!

Boxing has been severely neglected by the media since the late 1980's and Standing 8 Count will serve as the perfect vehicle to create awareness and in doing so, increase the popularity of today's fighters. Right now, you can make the argument that no such vehicle exists for boxers in this country (on television) and that is the main reason why Standing 8 Count was created.

Standing 8 Count will also return the sport of boxing back into American pop culture and serve as a launching pad to catapult today's talented and charismatic fighters (many of whom are virtually unknown) to a level of super stardom in the world of sports and entertainment.

To put it simply, there NEEDS to be a 'Bible of Boxing' on television and Standing 8 Count would serve that very purpose!